What does security lockout mean on iphone and how to fix it? 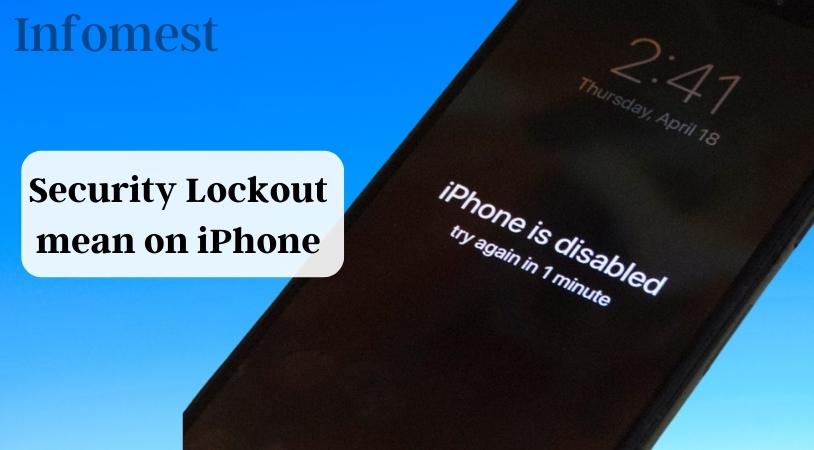 You may get a Security Lockout warning if you have forgotten your passcode or tried it incorrectly many times. Many people face this problem, and new iPhone users may be afraid of this situation. To solve this problem, let’s understand security lockout mean on iphone. It is human nature to forget the passcode of any device. The user makes various attempts to enter the correct passcode. But the iPhone is different. iPhone ensures that there are no security breaches. The device does not know who is entering the password and only ensures the right passcode.

So, for safety, if various attempts are made, the iPhone will be locked, and the user will have to bypass many security challenges to unlock the phone. But you should know about the meaning of security lockout iPhone.

What does security lockout mean on iPhone?

Remember that if you enter the passcode incorrectly 5 times, the iPhone will say, “iPhone is unavailable, please try again in 1 minute”. In iOS version 15.2 and above, if the passcode is entered incorrectly and a security lock occurs, it means that unlimited attempts have been made. The only solution is to factory reset the iPhone. Fortunately, iOS 15.2 has launched a new security lockout feature. This feature allows users to unlock their phones without using a computer.

How to fix the security lockout issue?

If you remember your Apple password, you can follow the steps below to solve it. Also, make sure it works on iPhone versions with iOS 15.2 or later.

Please be assured that once deleted, and content can be restored using various backup methods such as iCloud and iTunes.

Can we prevent security lockouts?

What are security lockout messages and screen patterns?

Messages that can not be used on iPhone since iOS 16. New!

How is the above iPhone unavailable or Security Lockout message pattern different?

Not much difference. Both mean that your iOS device is unavailable for security reasons.

You probably see the same pattern of Security Lockout and iPhone Unavailable messages consistently. But it’s okay to see alternating messages on one device when looking at both. All the patterns exist from our team, steams numerous tests. The reason is that iOS 15.2/iPad 15.2 and later software have different minor versions. It’s the reason for Apple’s side.

How long do Security Lockout messages appear on iPad or iPhone?

What happens when I tap Erase on my device?

What is the most important thing to do when iPhone Security Lockout?

There are many ways to reset the iPhone for security lockout. All solutions need to reset iPhones and clear and enable data. There are no exceptions to the way third-party software works. Security lockout iPhone is facing the risk of data loss in the first place without backup.

Without backup is a nightmare. Some readers have an earlier picture of their family and say they don’t want to lose it. And they have no backup at all. Ask the SoftwareDive team for help. However, it is a pity. It’s a really hard lesson.

Are you trying to fix the iPhone security lockout without losing data?

It requires you to have a previous backup. If you have a backup, you can restore your iOS device by restoring it from an iTunes backup, an iCloud backup, or a backup of third-party software or cloud services. You can also use SD Transfer software to transfer backed-up content from your computer to your iOS device.

How do I prevent my iPhone or iPad from being locked out?

How do I release a security-locked iPhone for free?

Yes. There are three free methods to resolve security-locked iPhones: iTunes Restore, iCloud Erase, and iPhone/iPad Erase. The optional security lockout to clear iPhone is the most convenient way to enable Apple’s newly developed device. Although the new Security Lockout tries again in 15 minutes or later with Erase Device option is a good deal for Apple, not everyone has it in iOS 15.2 and later.

Can I fix the security lockout iPhone with a forced reboot?

No. The Security Lockout message screen will still show another button, such as Emergency or iPhone/iPad Erase.

Well, now you know what security lockout means on iPhone? Simply put, any number of attempts to enter a passcode has failed, and iPhone is locked. In the older versions, the only choice for people who wanted to open without a computer was to use a workaround, find a phone and other alternatives to solve the problem or take advantage of a bug in Siri. Fortunately, with the new security lockout feature introduced in iOS 15.2 and higher, you don’t need a computer. All you need to do is back up your content regularly and remember your Apple ID and password.

How To Hide Apps On IPhone Without Uninstallation? 4 Best Ways